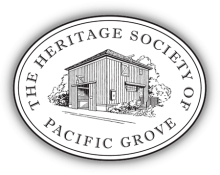 Newsletters and Board & Batten 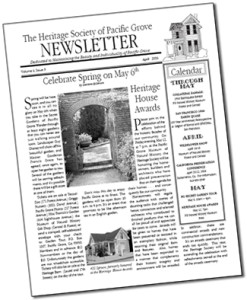 The Pacific Grove Heritage Society publishes a quarterly newsletter, updating the community on upcoming events, local historic projects, and interesting articles written by Heritage Society members. If you want to read it, you have a few options. You can become a member and have the newsletter mailed to you. You can subscribe to our newsletter via email and have the newsletter sent right to your email box. Looking for another option? Well you have come to the right place because you can read our current issue right here or peruse any of the many issues we have archived here online.

We are currently working on uploading all past Newsletters. Thank you for your patience. If you are looking for a specific newsletter or article, please Contact Us and we will be happy to help.

The Board and Batten in its present 5.5”x8” multi-page format evolved from the original Newsletter of the Heritage Society of Pacific Grove. The Heritage Society from its beginning has published a newsletter to keep in touch with its members. The first Newsletter available in Society archives is a mimeographed 8.5” x11” single page dated February 1976. In it, recipients are invited to “Come to an election meeting on Monday, Feb. 2 at 7:30 p.m. in the Christian Church at the corner of Central and Carmel Avenues.”

We are currently working on uploading all past Newsletters. Thank you for your patience. If you are looking for a specific newsletter or article, please Contact Us and we will be happy to help.

Nominees for the first Board of Directors were listed:

In the Society’s early years, newsletters were published on an irregular schedule: sometimes monthly, sometimes bi-monthly, sometimes four times a year, depending on the Board’s perception of the need to communicate with members and the energy of its editors. Newsletter editors included: Wendy Howe (1976), Ron Cobley (1977), Frank Keillor (1978), Jane Dinell (1979, 1980), Dorothy Scardina (1981) and Mary Thiele Fobian (1982, 1983). The format of the publication was sometimes 8.5”x11”, but most commonly 8.5”x14”. All were mimeographed. Business card size advertising was accepted in some of the later newsletters at a rate of $5.00 for members and $10.00 for non-members.

At the Board of Directors meeting of September 1979, the name of the Newsletter was changed to The Board and Batten, a name referencing the style of vertical wood siding typical of Pacific Grove’s earliest residences.

Adam Weiland was elected President of the Heritage Society in 1983 and at that time took on the duties of Editor/Publisher of The Board and Batten, a position he held until 2002. It was Weiland who transformed The Board and Batten from its previous newsletter function to the small, respected journal of the history of Pacific Grove and its surroundings that it remains today. Until 2003, the words “Newsletter of the Pacific Grove Heritage Society” remained on the publication’s masthead and each issue carried notes and information about Heritage Society members and events as well as articles of historic interest.

When the Heritage Society Newsletter resumed independent publication in March 2001, it reflected the original purpose of the society’s newsletter, informing members about current Society events and preservation issues. The Board and Batten, in turn, focused on its mission as the voice of history for our community.

Bob Davis compiled all the issues from 1983 – 2008 for this digital archive as of February 2009, with thanks to Don Beals who preserved and made available all the early newsletters and other records of the Heritage Society. This archive was updated and reorganized by David van Sunder in July 2010.